Although I grew up in Darien, Connecticut, a small, coastal town whose affluence identified it as part of New Englands Gold Coast, my childhood was modestly middle-American. Sports and fishing were my passion, and I was lucky in both. I was a member of the Little League All-Star team that went to the World Series in Williamsport, Pennsylvania, and I played halfback on the high school football team that won the state championship. Every Opening Day of fishing sea 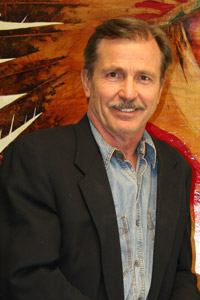 son you could find me throwing spinners and worms into trout streams, and every Christmas I would join my grandfather in Key Largo, Florida, trolling for mackerel and marlin in the Gulf Stream.

What differentiated my family was that we were Quakers, and we regularly opened our home to others less fortunate: Fresh Air Fund kids from the inner cities; a foreign exchange student from Brazil; two of the Hiroshima Maidens, young women disfigured in the atomic bombing of Japan who were brought this country for surgical repair; and two of the Ravensbruck Lapins, as they were called: Polish women subjected to senseless medical experiments by Nazi doctors. Sitting in on all those interviews by reporters who came to the house, and listening to the dramatic, human stories that were told, set my course as a writer.

After graduating in Philosophy from Knox College in Illinois, and studying Creative Writing in the Masters Program at San Francisco State, I cobbled together a career in journalism  first as the editor of a small weekly newspaper in Durango, Colorado, then as an investigative freelancer for national magazines, and finally as an author, penning non-fiction books for Viking Penguin and Simon & Schuster. Some of my books fell into the true crime genre, others were attempts to rescue chapters in human history before they were forgotten. With my last book I achieved most of my goals: a national book tour and appearances on Good Morning America and CNN; bestseller lists, foreign and movie rights; and an invitation to testify before a Congressional hearing.

I was passing through Chicago on a research trip for another book when I came upon Cow Parade, the public art exhibition featuring artistically transformed cows. I was charmed, and returning to my home in Santa Fe, New Mexico, I decided to take a hiatus from writing and put together a similar project that added a new chapter to the history of the horse in art.

Often I have been asked how my background as a writer prepared me to found what has become a successful business story. The answer is easy. Writers begin with an idea they are passionate about, they do their R and D (research and development), and they come up with a product they believe in. Then they must deliver it to the marketplace. Writers are, in other words, the ultimate entrepreneurs.